Taking a Taxi in Berlin is just great: when you’re in a hurry, when the public transport is not running, when the weather conditions are awful – or you want to go from A to B ‘now’. Or maybe you just want to feel comfortable and safe cruising across the city. And in Berlin, Cabs are not only on-hand almost everywhere – but taking a Taxi is also still quite affordable. Berlin Taxi prices are still comparably low.

Among all German cities Berlin actually has the largest Taxicab fleet: over 7.500 cabs are competing for clients, operated by over 3.000 mostly small size Taxi businesses.  Many cab drivers are self-employed – many Taxi companies have only very few cars. There is strong competition between Taxi Drivers, Taxi Companies and Taxi offices.

Great competition may lead to low prices: while many tourists probably actually think a TAXI ride is just a bit too nice to be affordable, in Berlin it still is: the price you have to pay for an average Taxi ride is still quite affordable, especially when compared to fares you’ll have to pay in other big cities.

How to get a Taxi in Berlin?

Berlin Taxi Prices – How much does a TAXI ride cost in Berlin?

Probably most people would like to know in advance, how much a TAXI trip will cost. And since Berlin Taxi prices are regulated, Berlin Taxi rates are not a secret – there is not much guessing.

You can of course always stop a cab and ask the cab driver directly, what the intended ride will cost you. That is common practice and usually the cab driver will at least try to give you a rather exact estimate. But that kind of situation can of course also easily become a bit uneasy – especially if the customer then decides to not take the ride. Although from my experience I must say, some time ago I used to always ask in advance – and it was always ok. Berlin Taxi drivers are familiar with clients asking the fare in advance and would probably lose quite a share of business if they wouldn’t answer that question rather accurate.

However, when planning a longer Taxi ride, the easier way to avoid surprises is probably to really check in advance, what your desired TAXI ride will cost. And of course there is an Online Taxi Fare Calculator (“Tarifrechner”), that will quite directly answer your question. All you have to know is the approximate distance you want to go – and one click later the Taxi Fare Calculator presents a price tag which is quite close to the actual fare. 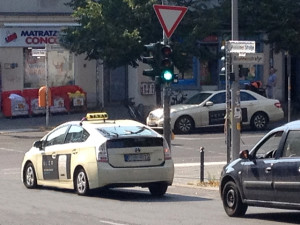 How to use the Online Taxi Fare Calculator? Well that’s rather easy, even though the fare calculator interface is currently in German language only. Basically all you have to do is enter the amount of kilometers into the field which is labeled “Fahrstrecke in Kilometer” and hit enter on your keyboard. The estimated fare will then be shown at the top of the page (“Ungefährer Fahrpreis: XX,xx EUR”) and at the end of the form (“Gesamtpreis”).

Here is the link to the Online Taxi Fare Calculator: www.taxi-in-berlin.de/taxitarif/taxi-tarifrechner/

You may also try to estimate the price yourself. The underlying formula is not that difficult to remember since the taxi rates are fixed: currently (July 2022) the price for a taxi ride is calculated as follows:

So here are three examples:

Then there may be some extra fees to the fare:

If you just want to go a short distance by Taxi, in Berlin you can take a special Taxi rate called short ride (“Kurzstrecke”). You can not ask a cab driver that is waiting in line at a taxi stand for a short ride, but you can stop a cab on the street and ask for this ‘special offer’.

A short ride will take you up to two kilometers far and will cost you 6 Euro. It is often a comfortable alternative to get from ‘A’ to ‘B’ – especially when in a hurry and/or if the weather conditions are bad. But please don’t forget to tip anyways!

There are several small companies that offer a service that is known in German as “Lastentaxi” and would translate to Cargo Taxi. In the U.S.A. these companies would probably some sort of man-with-a-van type of business. But besides this you can actually also transport things with a regular cab. So for example if you would want to move things across the city like a bookshelf or a new TV or band equipment or any other bulky stuff, you could just call a cab. For bulky objects there is a special fee of 5 Euros. You should probably ask the Taxi Service in advance – they might then send you a larger car right away.

Traveling in a Group? Take a Maxi Taxi / Minibus.

You can also ask for a special car if you would want to travel in a group of five to eight people in just one car. There are minibuses that can take up to eight passengers. A ride with five or more people will cost you an extra fee of 5 Euro.

A tip on tipping

I think this is very important: What the online calculator does not show, is that you actually should tip – I would even say you have to tip! Taxi drivers don’t get paid very well and the gratuity is part of the deal – which by the way also counts for restaurant workers etc. But how much should you be tipping? I suppose everything between 10% and 20% is considered ‘ok’. Of course: the more, the better (see also: Tipping in Berlin).

Also tipping on a short ride “Kurzstrecke” is welcome, even if it disturbs the concept of ‘short ride = cheap ride‘. Since the short ride only costs 5 Euro, I usually pay 5,50 Euro for that short trip – sometime 6 Euro. I think that’s still quite a fair deal for having the comfort, peace and quiet of a Taxi for up to 2 kilometers.

This is a difficult question – at least at the moment it still is. Most, if not all Berlin Taxi drivers will appreciate cash. And chances are that actually many Taxi drivers still prefer to take cash, even if they take credit cards. And paying cash might actually also be cheaper: in 2015 you would have to pay an extra fee of 1.50 Euro for credit card payments. Today (2022) there should be no extra fee – but i am not 100% sure about this. So checking your wallet before stopping a cab will help you avoiding unpleasant complications. And an extra taxi ride to the nearest ATM machine might be avoidable.

That said many Taxi drivers will actually accept credit cards and also other payment options. As far as I know even PayPal is accepted by some cabs. Usually there should be a sticker by one of the windows indicating what cards or alternative payment methods are accepted. But you probably better ask the driver if he/she accepts credit cards before starting the ride anyways.

Updates: in January 2015 Detlev Fruetel, head of the Berlin-Brandenburg taxi association announced, that an agreement is about to be signed that should make it possible to use credit cards in all Berlin (and Brandenburg) Taxis by the end of 2015. Read the full story over here: www.thelocal.de/20150105/finally-berlin-taxis-to-take-plastic

And there is currently a new law underway that would force all taxi drivers to take credit cards. But of course German bureaucracy is not that fast – so chances are the law will not come to force any time soon. So you probably still better have enough cash on you.