Here’s a list of some famous and some infamous Berlin Quotes: things people and politicans said about the CIty of Berlin, about the Berlin Wall, about Berlin’s past, present and future. Some of these quotes are probably world famous – others are yours to discover:

This quote comes from Klaus Wowereit, the mayor of Berlin City from 2001 through2014. In an Interview with the German financial magazine “Focus Money” on 6th November 2003 Wowereit relates to Berlin’s difficult financial situation (‘poor’) while pointing out Berlin’s potential (‘sexy’). The quote was adapted by many Berliners since everybody knew what he meant and almost everybody somehow felt the same way (‘poo but sexy’).

“Nichts darf uns aufhalten! Alles ist möglich! Berlin ist frei!”
“Nothing shall stop us! Everything is possible! Berlin is free!”

The above quote comes from Bill Clinton, former President of the United States of America, visiting the Brandenburg Gate on July 12 1994 . Clinton delivered the famous words actually in German. I cried. He was so right. And I still have to cry sometimes when I see and/or hear that speech again. I just loved that quote – and I still love it. For me this goes into the category “Top 10 Berlin Quotes ever” together with Kennedy’s “Ich bin ein Berliner”, Clinton said what everybody felt at that time. And It’s still all so true :) See / hear a video clip of Clinton’s speech here or read the transcript of that speech right here.

Former major of Berlin and chancellor or Germany Willy Brandt at the West Berlin city hall Rathaus Schöneberg, on November 10th 1989 – one day after the first East-Berliners passed the border between East- and West-Berlin.

“Wer zu spät kommt, den bestraft das Leben!”
“Those who are late will be punished by life itself”

Mikhail Gorbachev during a visit to East Berlin 1989. Gorbachev  actually said something diferent: “Dangers await only those who do not react to life“. This was then interpreted and translated into the well known ‘quote’ “Those who are late will be punished by life itself“.

“Die Mauer wird in 50 und auch in 100 Jahren noch bestehen bleiben, wenn die dazu vorhandenen Gründe nicht beseitigt sind”
“The Wall will still be standing in 50 and even in 100 years, if the reasons for it are not removed” 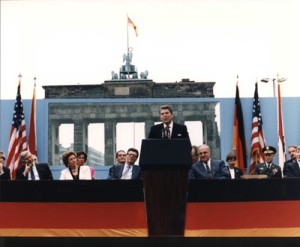 There are quite many sources that honor Reagon for his speech at the Brandenburg Gate – pointing out, that this was actually the moment, when the Wall began to collapse.

I donÄt want to question the positive effect Reagans speech may have had on the developments of 1989/1990, but I actually think that his speech was rather one important detail of a greater process, than the original trigger: in Russia President Gorbachev had just introduced his concept of Perestroika and Glasnost – so things were about to change – the East was opening towards the West. And Reagan was ready for negotiations. 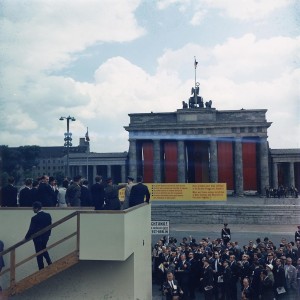 This is probably the most famous of all Berlin Quotes: John F. Kennedy, visiting West Berlin in 1963, expressing the American point of view on the things happening in Berlin / the Berlin Wall. It was a statement of solidarity with the walled-in West-Berliners and a message to East Berlin, East Germany and the Soviet Union: “Don’t mess with West Berlin or you mess with us!“. The Berlin Wall was a symbol for injustice and the lack of freedom. These times are over. Today the Berlin Wall stands for the people’s yearning for freedom and the possibility to obtain freedom in the end. Kennedy’s Berlin Quote also stands for this yearning for freedom as well as the will to protect it – but also for the solidarity between peoples and nations – between the people of America and the people of Germany. Ich bin ein Berliner! Are you?

Legendary quote about the Berlin Wall by Walter Ulbricht, head of East German government on June 15th 1961 – responding to a journalist that was not asking about a Wall being built in Berlin in a press conference. The incident happened about two months before the Berlin Wall was actually built and was a first indication, that there were actually plans to build a Wall between East and West Berlin.

“The day will come when the Brandenburg Gate will no longer be located near the border,”
“Der Tag wird kommen, an dem das Brandenburger Tor nicht mehr an der Grenze liegt.”