Today is another “day of action” against the re-construction Kastanienallee in on the schedule: meet friends, see bands, drink a drink, and sign the petition against the demolition  of Prenzlauer Berg’s eye candy street #1 – also known as Casting Allee..:). 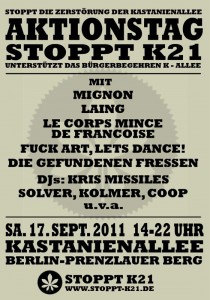 Currently some 7000 people have already signe the petition – another 3000 would be great. Together that would make it a nice impressive number (10000)  and ensure that the petition would find its way through the offices.

But why are people actually againt the re-consrtucion – or renovation of Kastanienalle? Wasn’t it in a bad state anyways? All these gaps and then this patch work type of a side walk?

Well – nobody is against improvements – but at the corner to Schänhauser Alle, right where the photo booths are, near Prater, you can already witness what the plan might look like: the new parking bays are located on the side walk! Or on what used to be “side walk”!!

If you’ve ever been walking down Kastanienallee on a sunny afternoon, you might have experienced how crowded the side walk already used to be – with all those cafés having their tables on the side walk, all those bikes parked, all those young moms pushing their breed from A to B – and back… Now imagine half that side walk missing!

And on the street the situation will also become worse – and way more dangerous: instead of having everybody cycle and walk and drive very carefully, we will have a fake-safe-situation – a situation, that suggests it is safe, but it’s not. The trams will go faster, the cars will go faster, and then you have all the usual party people, kids, cyclists, language school students – jumping on the street, crossing it, running to catch a tram… omFg..:/

Well – what else can I say – here’s some quotes:

“For the re-construction of Kastanienallee a lot of money is spent. And then the street will only become more dangerous.”
Wolfgang Thierse, Bundestagsvizepräsident

“I think the people are right. I like the Kastanienallee the way it is.“
Wim Wenders, film director

“Kastanienallee is a treasure. Keep it as it is!”
Peaches, Sängerin