It’s not that easy to build or re-build a castle – properly. Originally we were promised nothing less than “The Berlin Castle”. Right in the heart of Berlin Mitte, right were once The Berlin Castle and later The Palace of the Republic were located, a new building was planned – with the looks of an old building (a.k.a. The Castle). But now things seem to look a bit different – or is it just me?

At least it seems as if there’s not enough money to rebuild the castle 1:1. Even though the costs of the construction of the “Humboldtforum” (= re-construction of the castle) are currently estimated around 480.000.000 Euros, there seem to be some Millions missing needed to rebuild the facade and the dome. Of course there will be a facade an there will be a dome – but by far not looking like what once was the original facade and the original dome of the original castle.

In yesterday’s online edition of Berlin’s newspaper “Tagesspiegel” a statement of the ‘Berlin Castle Foundation’ (“Stiftung Berliner Schloss – Humboldtforum”) is quoted, which suggests that the costs for the dome alone were cut from 15 Million for the original plans, to an estimated 7 Million Euros for the ‘cheap copy’. 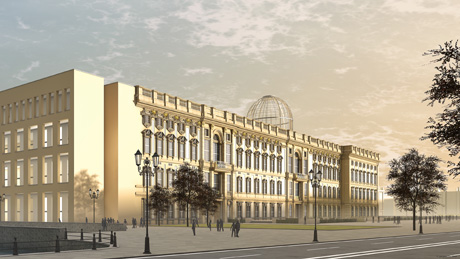