First things first: since 2002 the currency used in Germany is the Euro. And of course also in Berlin as well as in many European countries the Euro is the one and only official currency. And despite Berlin’s reputation as a tech friendly start-up city, cash is king. So before going out for dinner or party you should probably make sure you have enough Euro with you – and that’s where a currency exchange office can come handy.

Cash is most welcome when it comes in small Portions

You might have heart of the previous city’s major Wowereit’s infamous words “Berlin ist arm, aber sexy” which would translate to “Berlin is poor, but sexy!”. This implements already, that cash can be – let’s say – difficult to handle in Berlin. Sometimes shop keepers, taxi drivers and bar waiting staff are not really happy with ‘big bills’ – especially if the bill you’re supposed to pay is not that high. Instead of surprising them with a 100-Euro bill it would be more wise to try to keep a stock of smaller value bills between 50 Euro and 5 Euro with you and try avoid the 100 Euro bills and above, if possible.

Some shops and restaurants even have a sign on display, saying that they can not and will not accept Euro-bills with a value of 100 Euro or more. And it is somehow understandable – the shop keepers and service staff would have to carry quite an amount of cash with them if ‘everybody’ wanted to pay for their Hot Chocolate with 100-Euro bills. 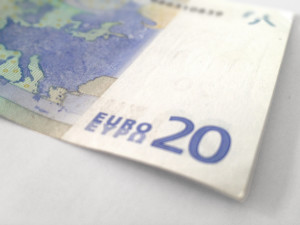 On the other hand paying with a credit card in Berlin is not really a reliable option either. Even if Berlin seems to be a tech-embracing city, cash is still king – and probably still will be for a while. Some people call it ‘plastic money’ which already implies how people feel towards credit cards. 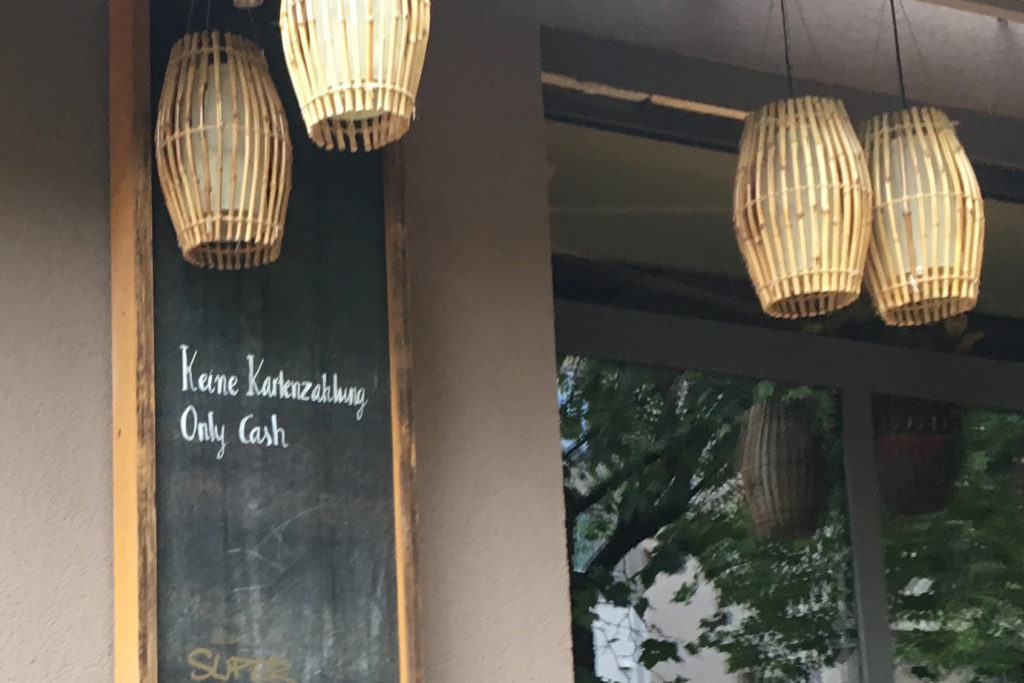 Sign at a restaurant: “Keine Kreditkarten – Cash Only” – Photo: T.Bortels/nuberlin.com

Where to ‘buy’ cash – ATM machines in Berlin

In New York I have seen ATM machines literally everywhere: even in bars, restaurants and shops. Don’t expect that kind of ‘cash machine network’ in Berlin. Instead you should probably  be prepared that you may not find any ATM machine nearby, when you need it most. So you should probably better carry a small stock of cash with you – that’s at least what I do.

In some areas there are some street corners more or less packed with banks and cash machines. And then again you won’t find neither bank nor cash machine for miles – or kilometers in that respect. And if you happen to find a bank in the middle of the night, chances are, you’re still in trouble – at least in Mitte, Prenzlauer Berg and Kreuzberg many banks close their doors for the night. And that means that also the ATM machines close for the night. So you may actually still see the ATM machines through the closed doors, but you can’t access it. Bummer.

So where do Berliners and Berlin tourists get their cash anyways?  There are basically two options: you either pull some money from an ATM machine (during operating hours) or you exchange some of your home currency for some Euros.

Where to exchange Money in Berlin?

You may come to Berlin with a stack of money of a currency other than the Euro. Please be aware that although your home currency may be very well respected here, you probably won’t be able to pay with it directly – even though these currencies are highly respected. Be it British Pounds, Swedish Crowns, Australian or U.S.American Dollars – you can anyways exchange almost every currency at one of the local money exchange booths.

Only a couple of years ago you could just walk into a bank and exchange your home currency for Euros right at the counter. While some banks may still offer that service, chances are that many banks don’t offer that service any more. Today it seems to be ‘too expensive’ to offer this service.

There are however some specialized money exchange booths (German: “Wechselstube”) where you can exchange your currency to Euros. The most well known are probably the one in the center of East Berlin inside Alexanderplatz Station, ground floor, see photo below) and the one in the center of West Berlin, just outside Bahnhof Zoo (Zoo Station). Exchanging money will cost you a small fee but – hey – there is only very few things in life for free – and money is not one of them.

There is also an overview at berlin.de with 14 different Berlin money change locations:
www.berlin.de/tourismus/adressen/wechselstube
…just click on ” Zum Eintrag” for phone number and/or link to related website…

What are these stories about ‘alternative Berlin money‘?

Yes, there used to be alternative ‘currencies’ in Berlin. One currency used in Prenzlauer Berg in the early 90ies was named “Bones” (“Knochen”). As far as I know it was the only ‘alternative currency that was initialized and ended without the authorities input.

Before 2002 the currency used in Germany was called “Deutsche Mark” or short “D-Mark”. In some places and on some special occasions you may still be able to pay with the D-Mark currency – but those occasions are very rare. The old German currency is however still valid. So in case you want you want to change E-Mark bills for Euro bills you may ask your local bank for the procedure.

Also coming up: Further information about international money transfer in case you want to receive or send money internationally.

Update: since this still seems to be of high interest, I will soon put up a map with money exchange points and also additional information about German / Berlin ATM machines…