The Oderberger Strasse stretches between Schönhauser Allee / Choriner Strasse with the Kulturbrauerei (‘Culture Brewery’) on the one end and the Bernauer Straße / Eberswalder Straße with the popular Mauerpark on the other end.

Even though you may have a different impression from looking at a Berlin street map, the street is situated in an almost perfect east-west orientation which has the nice side effect that you can see the sun rise on the one end, and the sun set on the other end of the street.

The Oderberger Strasse is divided into two parts by the only street crossing it: Kastanienallee. The shorter end points towards the crossing of Choriner Strasse and Schönhauser Allee – and Kulturbrauerei. Here you’ll only find few cafés and shops. Instead you’ll find the oldest trees of the street and the grand old public pool ‘Stadtbad Prenzlauer Berg’ – which is not so public any more since it was bought by the near by language school and turned into a hotel. 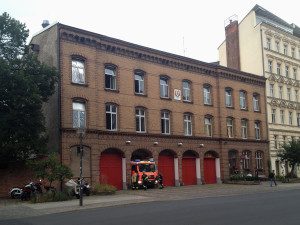 The other longer part of Oderberger Strasse hosts a number of cafés, bars and restaurants along and also a couple of shops – mostly small fashion boutiques and second hand / vintage shops.

And then there is also the grand old fire fighter headquarter, which is the oldest still operating fire fighting headquarter of Germany.

On weekends, especially on days with ‘friendly’ weather conditions during spring, summer and autumn months, the street can be rather crowded with people roaming either towards Mauerpark – or returning from Mauerpark – since there is not only a quite popular flea market on Sundays, but also bands playing and people having a picnic in the park.

How to get there / public transport: