The street is originally named after the castle Schloss Schönhausen, located in Pankow / Niederschönhausen. Literally “Schönhausen” would mean something like “good living” – which kind of suits the cliché – the common opinion of the neighborhoods the Schönhauser Allee crosses: Pankow, Prenzlauer Berg and Mitte.

If you want to discover Schönhauser Allee for yourself, I would suggest you start your walk from the U-Bahn- / Tram- / S-Bahn-Station Schönhauser Allee. Today the station is actually part of a small shopping mall – the ‘Schönhauser Allee Arkaden’ – where you can find almost everything you need for daily life: a supermarket, a toy shop, clothes, flowers – and even a post office.

The first thing you will probably notice once you step on the street is the massive metal viaduct in the middle of Schönhauser Allee. Between Westlandstrasse / Esplanade (near Wisbyer Strasse, Pankow) and Sredzkistraße / Choriner Strasse (near Kulturbrauerei) U-Bahn U2 operates above the ground. Feel free to walk underneath the viaduct – it’s kind of funny feeling to have cars on both sides and the U-Bahn above.

On your way to Eberswalder Strasse you will find lots of small shops on both sides of the street. But I wouldn’t consider this a typical shopping area. Instead you will find copy shops and drugstores, some butcher, some bakery – but of course also some clothes and shoe shops.

Between the crossing of Schönhauser Allee / Sredzkistraße / Oderberger Strasse / Choriner Strasse and Senefelder Platz you may continue your walk again in the middle of the street. Here the Schönhauser Allee has a green walking path right in the middle, with trees, bushes and some park benches. So you may either enjoy your walk down the alley between rows of trees and bushes and/or take a rest on one of the many park benches.

Walking down the green walk way, you actually walk above the U-Bahn U2 – occasionally you may see air outlets in the green, on the sidewalk, next to the road.

Between the Kulturbrauerei and Mitte / Torstrasse there are only very few shows, cafes and restaurants. But instead you may want  to have a look at the old Jewish cemetery that spans between Schönhauser Allee, Kollwitzstrasse, Knaackstrasse and Wörther Strasse.

Next to the cemetery you may notice a large yellow building. It’s a former Jewish Retirement Home / Nursing Home, built in 1880 – 1883. You can find additional information on an information board placed aside the green walk or through Berlin’s official website: Jewish retirement home Schönhauser Allee (scroll down for the english text).

On the next big street crossing we can find a few interesting details. Schwedter Strasse and Metzer Strasse both begin/end here – both worth walking. And there is a small park called Senefelder Platz, that also the U2 subway station is named after. At the one corner of the park you may find a typical historical Berlin toilet.

And a few steps further down you can find a monument of Alois Senefelder, who invented the printing technique of lithography in 1796. 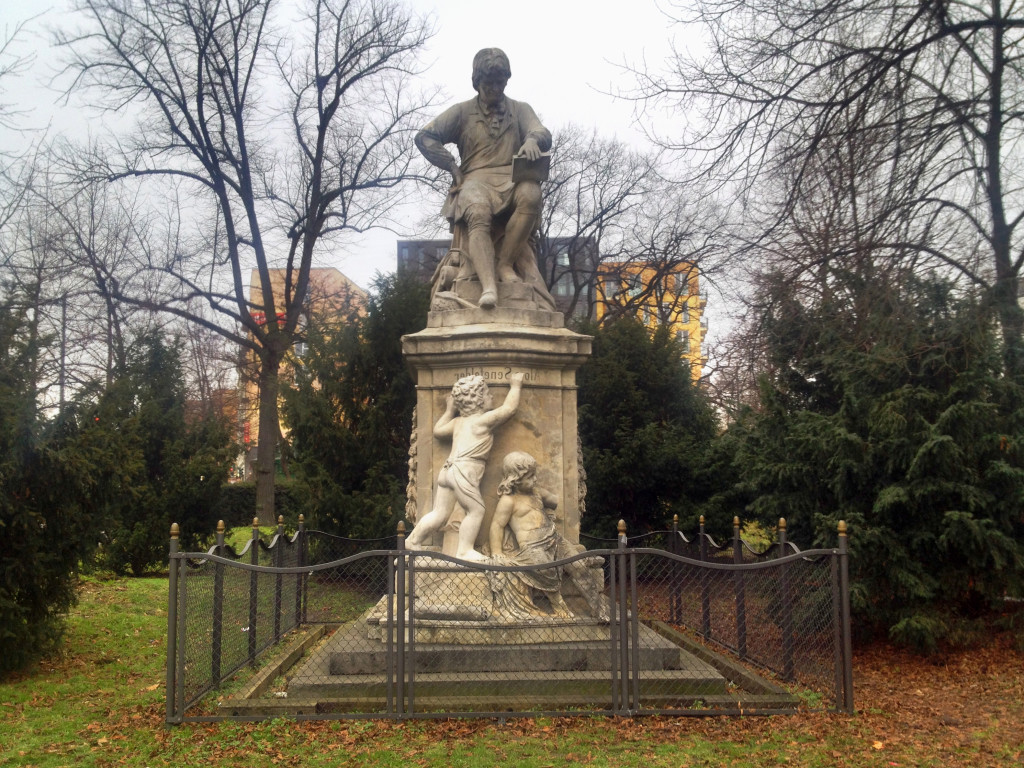 Taking a closer look at the monument you will probably notice that Senefelder’s name is written in mirror-reversed lettering – a direct reference to printing / lithography. And one of the two children is looking at the inscription using a mirror – showing the lettering unreversed.

Further down, on the opposite side of the street, the former Theresienschule – part of the Herz Jesu Kirche (probably translatable to “Church of the Sacred Heart“) can be seen from Schönhauser Allee. 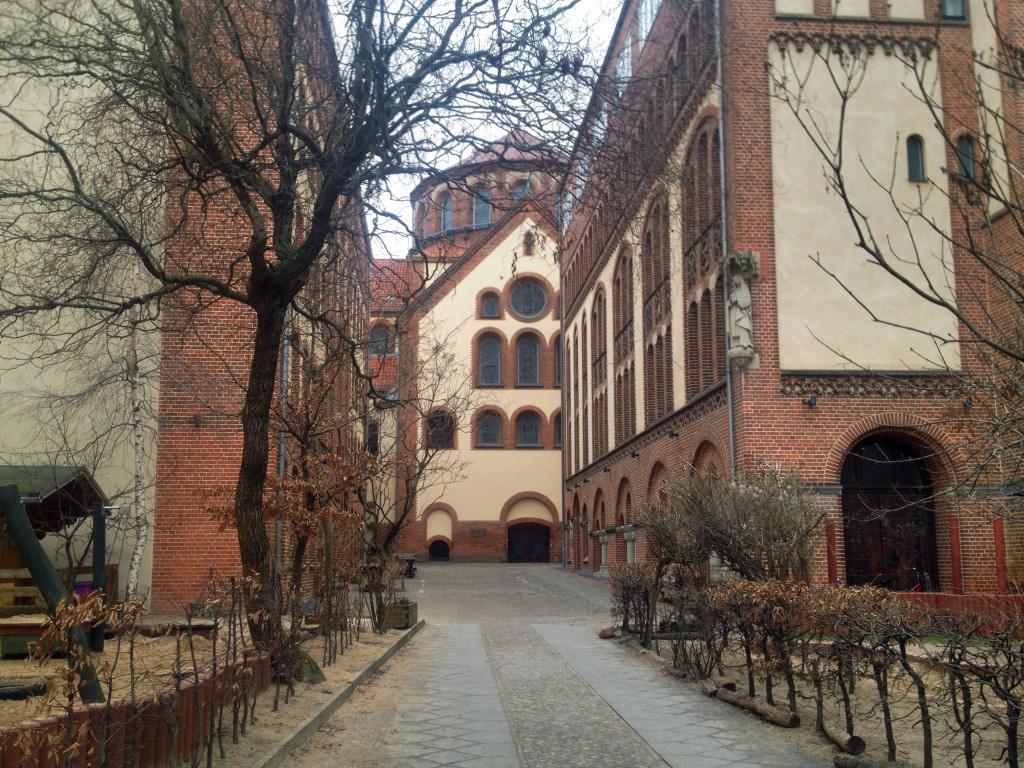 The catholic girls’ school was closed by the Nazis in 1941 but reopened in 1945. For the following decades the school was  the only catholic school in East Germany.

In 1991 the school had to move to Berlin-Weissensee because of the growing request. The rooms in Schönhauser Allee were just too small.

A bit further down you may enjoy a rather nice view to Mitte. The next big street crossing is Torstrasse – Schönhauser Allee end here – or actually continues as Alte Schönhauser Strasse.

In the far you can see the green roof of the Berlin Dome. 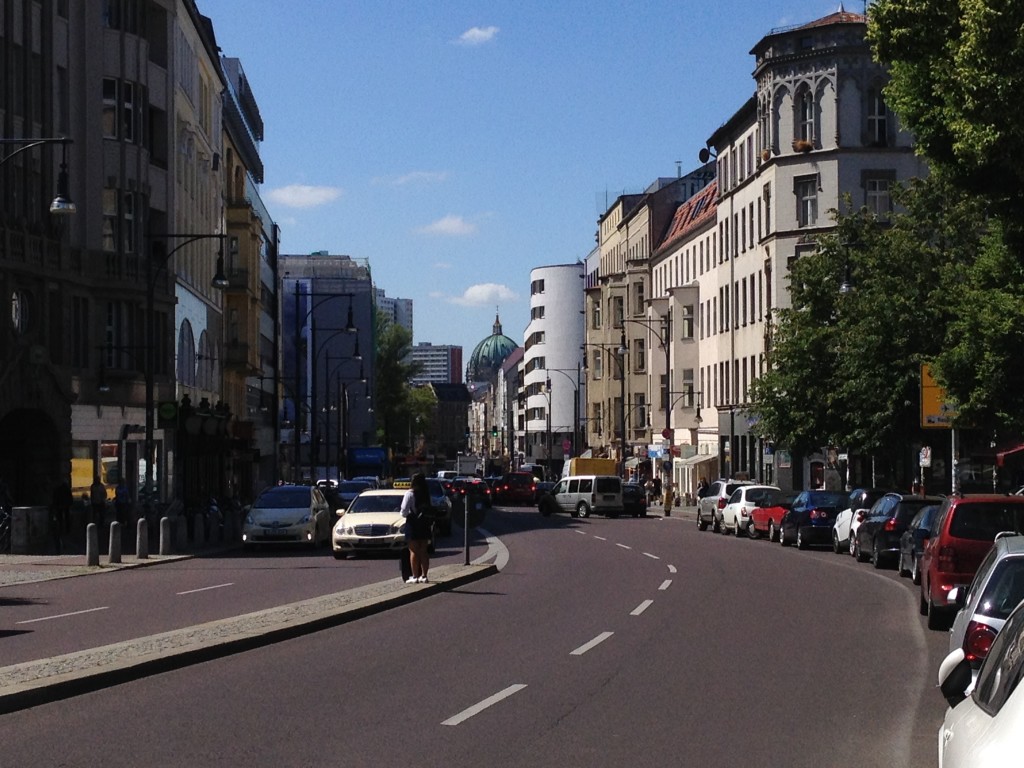 Schönhauser Allee, view to Schönhauser Tor, Berlin Mitte – in the background the green dome of the Berliner Dom