Weather you’re interested or not – you probably can’t really avoid seeing, hearing and probably even feeling it: Football’s in the air (yes, over here Football in the name of the game) and in almost every bar, every television set, every corner. Be it in the usually quite quiet greens of  Tiergarten – you’re just around the corner of Germany’s biggest public viewing event. Be it in ‘alternative life style-ish’ Prenzlauer Berg – most likely even the smallest Hot Dog booth will have a flatscreen on display, showing the game. Be it in high quality shopping and culture destrict around Kurfürstendamm – you will witness a car parade, honking their way through Charlottenburg. This – at least – is my impression, 4 hours before kick off.

The weather may not be good enough to actually join any of those numerous open air public viewing arenas – but – be sure: if you really want to see the match, there is plenty of options. Just walk into the next bar or kebap restaurant and ask – since the first big public viewing mayhem in 2006 ‘every locality’ will most likely have a TV and probably also turn the volume up when the game is on.

Well – what else can I say? Enjoy the show! And just in case you are not interested in Football (or Soccer) and would like to avoid this ‘circus’ with all its ‘clowns’ –> please try to relax… It will be over soon anyways.

Update: the weather was just fine, and thousands of fans witnessed this incredible match: Germany won over Brazil 7:1 !! So… Here’s the next / the last three public viewing opportunities for this World Cup:
1) Wednesday July 9th Argentina vs. Netherlands
2) Saturday July 12th ??? vs. ???
3) Final: Sunday July 13th ??? vs. Germany

Update: Ooops – they did it again! First Brazil 7:1 !! And then the german team also won against Argentina in the world cup final – which means: germany is Weltmeister!
Outside there’s fireworks, some fire fighters and police cars can be heart – and cars honking their way up and down the road (“Autokorso!”). Hurray. Congrats! 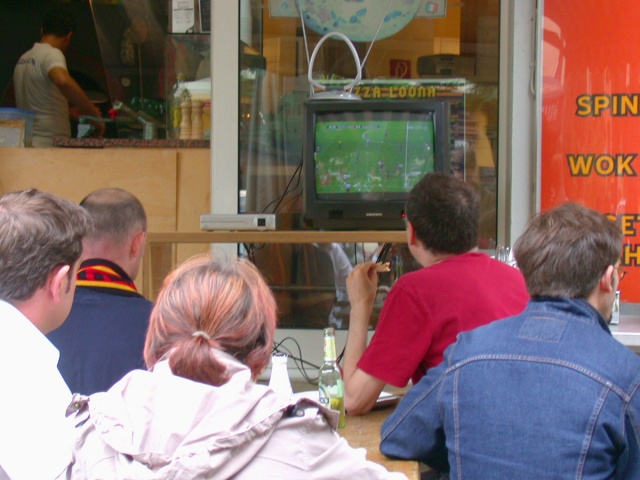