If you’ve been to Kastanienalle in Prenzlauer Berg, you probably know this wide open space opposite of the Biergarden Prater that was used as a parking area for ages. Nothing special – just some space for about 100 cars, some trees, some trash, some graffiti – a short cut and an open view connecting Kastanienallee and Schönhauser Allee.

Now these times seem to be over. Yesterday I witnessed the first tree cutting activities. Today the roar of the chain saw continued – I expect all trees gone by the end of this day.

Of course this didn’t come as a surprise. The typical Berlin gaps (Baulücke) became quite rare over the last few years and at least since I saw the construction site at Schönhauser Allee / Cantianstrasse I expected some construction activities in Kastanienallee rather sooner than later.

So – what is the plan for the ex-parking gap between Kastanienallee 97-99 and Schönhauser Allee 148? The online news magazine prenzlauerberg-nachrichten.de seems to know: a 30 Million Euro apartment and commercial project – both rental and for sale. On the front towards Kastanienallee the focus will be on apartments, on the front facing Schönhauser Allee it will be office space. A walk through / passage connecting both streets is officially part of the project – but we’ll see what will be left of that. Since the architect (Grüntuch Ernst) seems to be the same as the one that designed the real estate project Marthashof in Schwedter Strasse, I have my doubts if that passage will actually be accessible for the public. Or maybe that passage will be used as a mini shopping mall – packed with fast food restaurants, shoe shops and a Starbucks coffee shop? That would be… I don’t know… We’ll see. 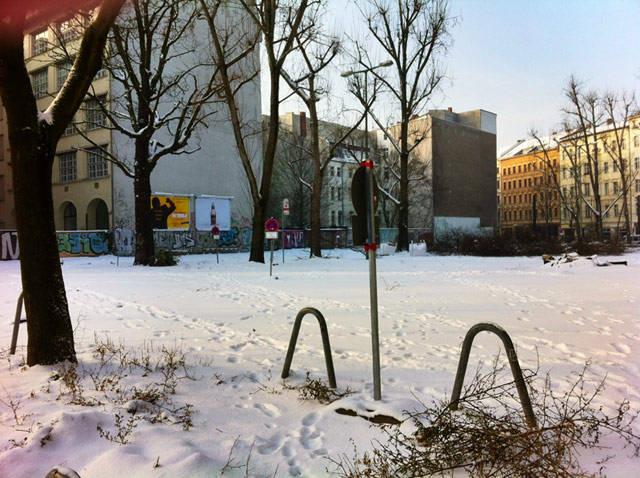 Update: the official project website seems to be online – at least for the real estate / appartment part of the project “Puhlmann Hof” –> www.puhlmann-hof.de
From the renderings you can get a good first impression of what Kastanienallee 97-99 will probably look like, when it’s ready: something between Marthas Hof and Hackescher Markt… or so… :)