When I was browsing through Berlin related news this morning, a report about Berlin’s alcohol law caught my eye. The headline “Berlin will allow 2 am last call” already suggested that the Berlin the article related to probably wasn’t the same Berlin I live in. And the teaser text went on “authorizing restaurants and bars in Berlin to serve alcohol until 2 a.m” leaving me with the certainty, that the article was actually not about night life and alcohol laws in ‘my Berlin’, but about local alcohol laws in some other Berlin, probably somewhere in the U.S. of A.

Nevertheless I wanted to read up that story, thought it would give me some goose bumps, imagining it was about this Berlin, capital of Germany, where I live, where alcohol laws are not that restrictive – and where bars are certainly open after 2 a.m.. I tried to imagine what a great hoax it would be to tell people, from now on they would only be served alcohol until 2 a.m. – especially since ‘everybody’ knows Berlin is a 24/7 city where the bars only close, when either the last bar fly or the bartender decides to leave the building. So for people in Berlin, New Hampshire the 2.a.m. regulation may be great news – for people Berlin, Germany however this would be the end of night life, as we know it.

Well – so I tried to read the full article, over at Berlindailysun. But clicking that link only lead me to a page that said “Your country (DE) has been blacklisted.”. Huh. No offense – but whoever designed that error message could probably have added some piece of additional information. Or? Well. Anyways – It must be quite a bit frustrating when you’re running a local newspaper in a small town newspaper in New Hampshire, population around 10.000, and then there are all these people that would like to read english/american news about Germany’s capital Berlin. So in that sense I do understand to block a website for a hole country – but the error message could indeed be a bit more ‘welcoming’ :) 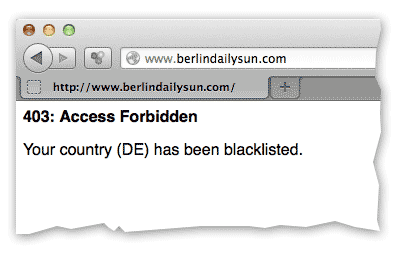