Starting this post I first have to mention some translation curiosities I stumbled upon: I first could not really believe that the English word for ‘Streik’ is ’strike’ – but that’s what my online dictionary suggested.. Well. Then I was wondering how I could translate the name of the German railway company – a word-by-word translation of “Deutsche Bahn” would result in “German Train” or “German Rails” – but maybe it’s not a good idea to translate names anyways..

Anyways – back to the topic: the Description-Tag of the homepage of the Berlin city train company “S-Bahn” (www.s-bahn-berlin.de) says it quite clearly: The ‘S-Bahn Berlin GmbH’ is a company of the Deutsche Bahn Group – and is not part of the Berlin public transport company BVG. And this is the very reason why last weekend not only the train traffic was affected by the strike of the train drivers – but also the Berlin public transport system was quite heavily affected. In other words: also the Berlin S-Bahn- / City-Train drivers went on strike.

This is also the reason why one could spot ‘parked’ city trains here and there – on the photo below you can see parked city trains I spotted from the bridge ‘Behmstraßenbrücke’ between Wedding and Prenzlauer Berg.. 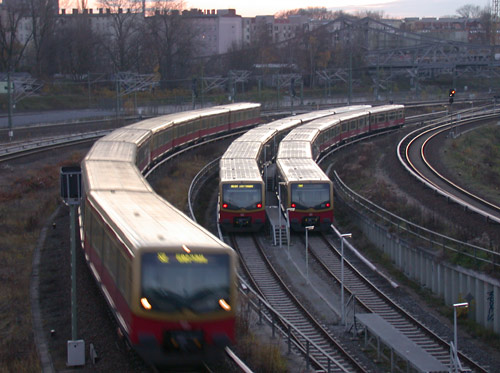 Looking at that picture one could think that two out of three trains were not in operation – but of course that wasn’t the case. I actually have no idea how many trains went – or not – in the news it was said that some lines were only served every twenty minutes, other lines only every fourty minuted – some lines even worse – looking at the reactions from different blogs I get the impression that this ‘largest ever train strike’ was quite ‘effective’ – or ‘effectful’..? Well..