The Döner Kebab – or just ‘Döner’ – or just ‘Kebab’ – is a very popular Berlin fast food dish – and it has been basically since the early 70ies. In most inner city neighborhoods you will probably always find a Kebab booth nearby – no matter where you are. And chances are that it’s not only cheap, but also good. At lunch time a “Döner” can be a handy meal that will not rock your wallet – and by night it may be a delicious after-party-snack. As you can see, the Kebab can be a quite versatile snack.

First things first: the name “Döner Kebab” originates from Turkish and means something like “rotating grilled meat”. Originally the Berlin style Döner Kebab consists of a ‘flatbread’ that is used as a ‘pocket’. Often a fluffy full size  ‘flatbread’ is cut into four pieces which would make four ‘Kebab Pockets’ or ‘Döner Bags’ or ‘Bread Bags’. Inside such a ‘bag’ all other ingredients are placed, often in layers. The most important ingredient is probably the meat, cooked or actually grilled, rotating on a vertical ‘rotisserie’.

The Kebab meat traditionally consists of slices of beef, often mixed with layers of minced meat. In the 80ies there was quite some discussion about what a Döner Kebab and its meat should consist of. 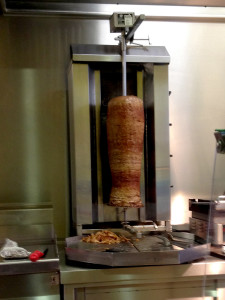 In 1989 Berlin authorities wrote it down in a paper called “Festschreibung der Berliner Verkehrsauffassung für das Fleischerzeugnis Dönerkebap” (“Definition of Berlin public understanding for the meat product ‘Dönerkebap'”). Since then up to 60% of the meat can be minced meat. After German law the minced meat makes the Kebab a minced meat product – which means it has to be fresh – it can not be ‘taken down’ over night. Instead it has to be either ‘finished’ or thrown away. This is also the reason, why late at night you may have difficulties in finding a Kebab place still serving Döner Kebab: once it’s all gone, then it’s all gone.

Other ingredients of a proper Döner Kebab: tomatoes, salad, onion rings (not fried), sometimes cucumber,  red cabbage, white cabbage. Another important ingredient is or course the sauce – or actually a combination of different sauces: spicy red sauce, garlic sauce and herb sauce. The kebab staff will most likely ask you how you would like your Döner. Basically you’re of course free to say “no onions please” (“ohne Zwiebeln bitte”) or leave any of the sauces out. The easiest of course would be to take everything the cook recommends. So if the Kebab staff asks you “Mit Alles?” (With everthing?”) you just need to nod or say “Yep! Alles!”.

Why ‘Popular Döner’ can be ‘Difficult Döner’

This is an easy one – or actually a difficult one – depending on the point of view: the more popular a Kebab stand is, the quicker the meat is cut down. And the quicker the meat is cut down, the less time it has to actually cook. So in the end you will have to decide: visit a not-so-popular place, where the meat is ‘well done’ – or visit a popular place, where you don’t really know, how long the layer of meat that will end up in your Kebab was actually exposed to the heat. Chances are, that both options are good; the popular place wouldn’t be so popular if they served ‘raw’ Kebab. Also: really popular places often have two or more rotating meat packs.

But if you are in a situation, where you have a group of 10 people ordering Kebab before you – and there is only one grilling device –– you might want to consider to wait a little longer and maybe drink an Ayran or a beer while the device does its thing.

Today there are also other types of Döner Kebab and also similar fast food dishes available. First I should probably mention, that the “Chicken Kebab” became basically the second most popular kebab dish. As the name suggests it is made from chicken – or actually often turkey is used instead of chicken, since it’s cheaper. As far as I know the reason for this ‘alternative’ Kebab to become so popular was due to the mad cow disease (BSE) in the 90ies. BSE has long gone – the Chicken Kebab is here to stay.

And then there is also the Arabic version of the Döner Kebab: Schawarma – also available with chicken or turkey meat “Chicken Schawarma”. It is basically very similar to Döner Kebab – but of course different herbs and different ingredients like potatoes are used – and also the bread is different: not as fluffy, as the ‘flatbread’ – but round and rather flat – but also very tasty.

And another ‘new trend’ seems to be to call the Döner Kebab “Gemüse Kebab” – which would mean “Vegetable Kebab”. But as far as I can see that Kebab has just the same ingredients as a regular, traditional Döner Kebab. But it seems to be popular anyways.

Döner Kebab is not only tasty and easily accessible – it’s also rather cheap. In Berlin you’ll most likely find a Döner Kebab sold with a price tag of 4 – 6 Euros. In some areas you may also find cheaper versions – but you should be aware: There is no such thing as a free lunch. Either you’ll have cheap ingredients, or the staff in under-paid. If a Döner Kebab is sold for less than 3 Euros you can be sure that both is the case.

My local Kebab place currently charges 6 Euros for a ‘bag’ stuffed with meat and vegetables – which is fairly big enough for a decent lunch. It used to be 3 Euros – but I have to admit that I find 3 Euros actually still slightly too cheap, to be honest. Well…

Back in the the there used to be what we called “Döner Wars”. One booth tried to be cheaper than a neighboring booth. I have seen ad banners advertising Döner Kebab as cheap as 0.99 Euro. The classic: in the end both booths are going bankrupt.