The Brunnenstrasse connects Berlin’s popular historical city center – and now shopping and tourist area Mitte with the not yet so popular Wedding. It basically stretches from Torstrasse / Rosenthaler Platz to the rails bridge at S-/ U-Bahn station Gesundbrunnen and has a total length of approximately 2.3 km (1.4 miles).

During Cold War Berlin times, the Brunnenstrasse was cut in two by the Berlin Wall. About half way the Brunnenstrasse crosses with Bernauer Strasse, where the former border between East- and West-Berlin was located. Both ends of Brunnestrasse facing the Berlin Wall were dead end streets. And even 25 years after the Fall of the Wall there are hardly any shops or cafés near the former border line. But I’ll come back to that later.

Walking up Brunnenstrasse all the way from Torstrasse / Rosenthaler Platz you will probably recognize the street’s appearance changing a lot: on both sides of the former Wall you’ll find different architecture, different street lamps, different types of shops and cafés.

Near Rosenthaler Platz you’ll first find some small shops, bars, restaurants and some hotels and hostels nearby. In the past years this area became a busy hotspot for people that want to explore the ‘backstage’ of Mitte. On a regular day you will see quite a few tourists in thies area – and local business has partly adapted to this. Right at Rosenthaler you will find a great variety of fast food booths – Berlin Döner Kebab, Pizza, Currywurst, Asian Food – basically everything you need to recharge your batteries for the walk. But you will also find some galleries, a bio supermarket, a tattoo studio, some fashion boutiques and similar ‘original’ businesses on this part of Brunnenstrasse near Rosenthaler Platz.

Walking further up north, you will find the Weinbergspark to your right. In summer time this is a very popular park to hang out at. In this part of Mitte parks are a bit hard to find, so Weinbergspark in one of the rare options to spend some leisure time in the green. 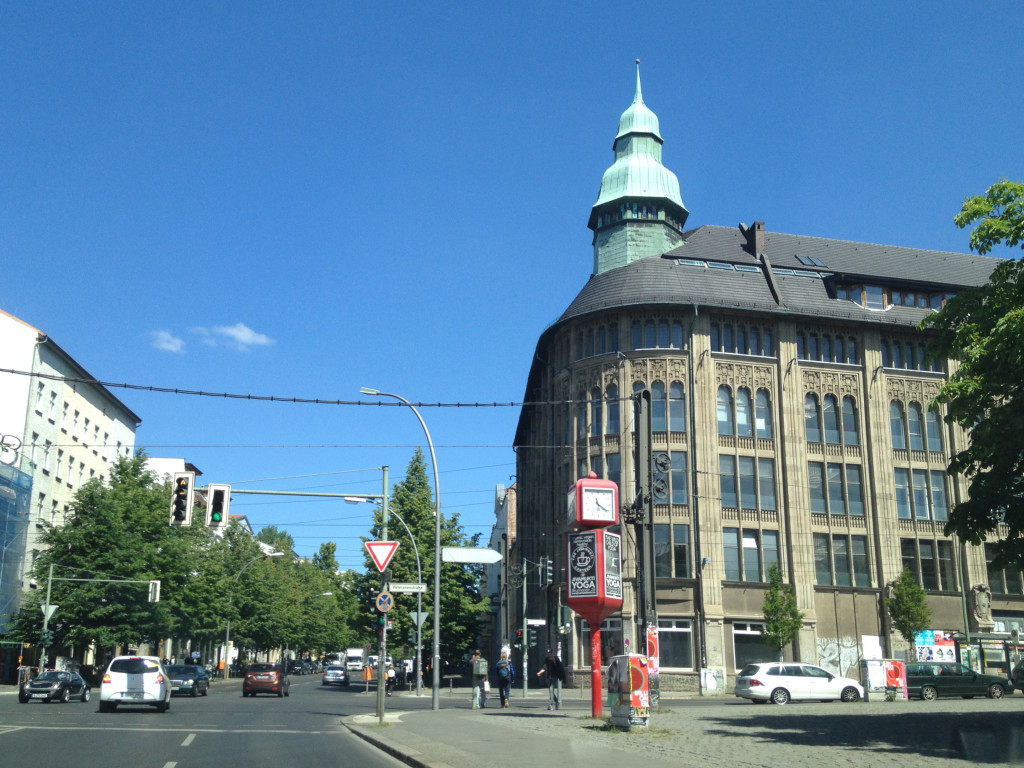 At the crossing of Brunnenstrasse with Veteranenstrasse and Invalidenstrasse a majestic old building, the former department store Jandorf (Brunnenstrasse 19–21), is waiting for even better times. On the opposite side of the crossing a not so majestic and old police station, which may look like a firefighter station since it is almost completely painted in red.

After approximately 15–20 minutes, depending on your walking pace, you’ll reach the site where the Berlin Wall was once located. As mentioned before, near Bernauer Strasse less shops and cafés can be found than one might expect. The only ‘highlight’ currently seems to be the Ost-West–Café (ost-west-cafe.de) right at the corner of Brunnenstrasse / Bernauer Strasse.

From this crossing, the Berlin Wall memorial stretches down Bernauer Strasse all the way to Nordbahnhof / Gartenstrasse.  This is probably one of the most popular tourist sights on Brunnenstrasse – and of course it’s also a great photo opportunity.Near the crossing you will find some information columns and a miniature model of the Berlin Wall and its surrounding neighborhood.

Nearby, another photo opportunity is waiting for those, that are looking for traces of former East-Germany: an old east German police car Trabant (“Trabbi”) is usually parked right next to the Ost-West–Café behind the Tram stop.

On the West Side of Brunnenstrasse a combination of Kiosks and ‘project rooms’ doesn’t look too inviting – but walking around here still gives me goose bumps, thinking that around here Brunnenstrasse actually used to be a dead end street – from both sides of the Berlin Wall of course.

Further up towards Gesundbrunnen you’ll walk past a former industrial site, the old AEG industrial area: a huge mostly red brick complex where AEG used to have one of their major production facilities. It’s well worth a visit – you can just walk right into the former company grounds. 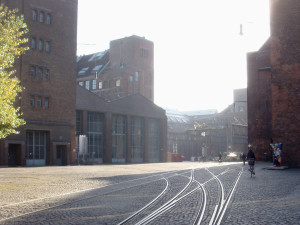 At the turn of the 19th century the company was one of the major producers of electrical equipment: light bulbs, motors and generators – AEG produced basically everything the ‘electric age’ was asking for. At that time AEG together with Siemes were among the most important industrial companies in Berlin, employing thousands or workers. The development of those companies had a great impact on the development of the city of Berlin.

Beyond the AEG area another park can be visited. You can either access it directly from Brunnenstrasse, Or if you walked across the historical AEG company ground you can access Humboldthain from the exit at Gustav-Meyer-Allee.

The Volkspark Humboldthain is a park with a historical twist: it houses one of Berlin’s few left Flak Towers – with a collapsed bunker buried underneath. Originally there actually two Flak Towers – but one is demolished completely. You may climb up the hill, which actually is the former Flak Tower, and enjoy the view over Wedding. There is of course a walking path and stairs up to the platform. The bunker underneath the hill used to prive space for up to 10.000 people.

The park also hosts a public bath (berlinerbaeder.de/baeder/sommerbad-humboldthain), a lawn for sunbathing, which is also a great sport for having a picnic, a playground for children and a beautiful rose garden with some bronze statues of sculptor Walter Schott,

Originally the well was called ‘Gesundbrunnen’ (fountain of youth / fountain of health) because it was said that drinking water from this very well would be very healthy. And actually in 1748 it was researched scientifically and then documented that water from this well would actually be healthy. More and more people came to take a bath in the healing waters of Gesundbrunnen, some of them stayed, and In the middle of the 18th century the area turned into a small city.