The Ackertraße in Berlin-Mitte is one of those ‘hidden’ streets. It stretches from Koppenplatz / Linienstrasse all the way across Torstrasse, Invalidenstrasse, past the Sophiengemeine Cemetary and the Berlin Wall Memorial at Bernauer Strasse up to near the roundabout where Scheringstrasse, Gartenstrasse, and  Liesenstrasse. 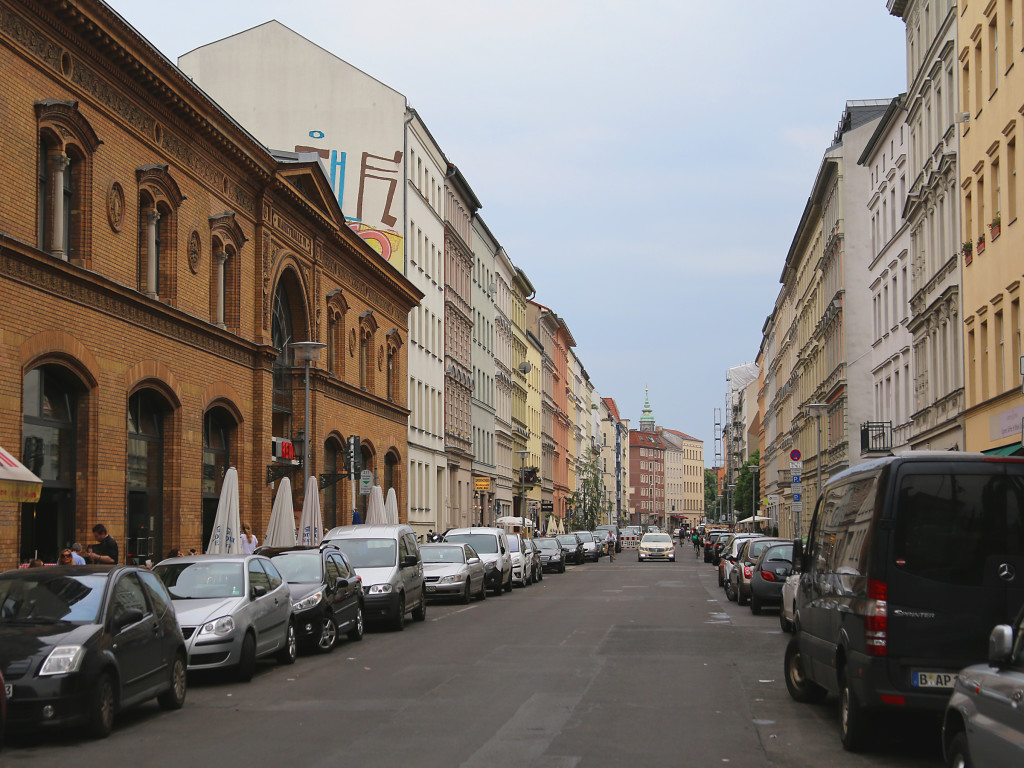 Ackerstrasse, view towards Torstrasse /  Berlin-Mitte – to the left: the old Market-Hall near Invalidenstrasse

Walking up Ackerstrasse you’ll find that the streets consists of many different ‘parts’. Down in Mitte you mostly have old Berlin-style apartment buildings. Between Torstrasse and Invalidenstrasse the ‘Markthalle VI’, or ‘Ackerhalle’, a former ‘market hall’, now super market, is probably one of the oldest buildings in the street. And it’s the only market hall that is in its original shape – at least from the outside.

Across Invalidenstrasse you’ll walk next to a cemetery wall all the way up to the Berlin Wall memorial. This part of the street can be considered ‘boring’, but it’s a good opportunity to let the thoughts travel and think about where you actually currently are walking.

Across Bernauer Strasse rows of 80ies apartment buildings don’t look so inviting – but also this part of Ackerstrasse has its charme. Again thinking that this used to be a dead end gives me goose bumps. And the architecture shows: this housing area was once designed, planned and built with the Berlin Wall right next to it in mind.

We use cookies to ensure that we give you the best experience on our website. If you continue to use this site we will assume that you are happy with it.Ok
Warning: Use of undefined constant en - assumed 'en' (this will throw an Error in a future version of PHP) in /www/htdocs/w007b038/wp/wp-content/themes/nuberlin/footer.php on line 35

Warning: Use of undefined constant   - assumed ' ' (this will throw an Error in a future version of PHP) in /www/htdocs/w007b038/wp/wp-content/themes/nuberlin/footer.php on line 75