When I today first read the article “A German fashion startup called off an event because Berlin wants to use the venue to house refugees” over at uk.businessinsider.com I though that this was a bit weird situation: Zalando basically ‘bought’ the fashion fair Bread & Butter just recently and now they cancelled it almost two years in advance because the City of Berlin might want to use the location to house refugees?

I do understand that it may feel a bit strange to hold a fashion event at a temporary refugee shelter in general. But what I didn’t understand was why is Zalando was actually cancelling their fashion event Bread & Butter at the former Airport Tempelhof in particular? As far as I know the event used to be quite important for the City of Berlin – and (correct me if I’m wrong) I suppose it would also be an important event for Zalanzo. 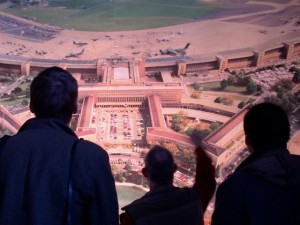 Only the hangar is over 1200 meters long and would probably provide more than enough space for a couple of parallel fashion trading shows. I once actually was at a festival at Airport Tempelhof (Berlin Festival) with literally thousands of visitors, gathering in one ‘corner’ of the hangar while two (2!) fashion trade shows took place at the same time. At the same location! Anyways.

Some facts and figures: together with office spaces and other rooms, about 179.000 m² of the building are currently theoretically available to be rented. Or actually currently *only* about 99.000 m² (equals about 1.075.000 square feet) can be rented, because 80.000 m² are already rented (thf-berlin.de/flughafengebaeude/mietflaechen/). Or, in other words, since we’re in Germany, to draw an image of the space available compares football fields: 99.000 m² equals about 10 football fields of space currently available at the former Airport Tempelhof building.

So – whatever reason Zalando actually has to cancel their fashion event – I would suggest it should be theoretically technically possible to host both Bread & Butter and Refugees. But maybe that’s just me.

Anyways – the good news is: Zalando is now considering the possibility of holding an alternative event that would actually help the refugees. Currently they’re considering of initiating some sort of festival – maybe something like “Band Aid”. The company is also making donations to refugees that are already in Berlin and is also planning to send a support truck to Sicily to help people that just arrived in Europe. I’ll stay tuned for more to come…