The Berlin Landesarchiv (Archives of the Land Berlin) in Reinickendorf / Tegel have recently opened an exhibition worth seeing. On display: historical maps of Berlin by Julius Straube, as well as historical photos and posters of Berlin of the 19th century.

One particular map from the year 1897 for example resembles what today would probably be called a “biking map” – a map made for bicycle riders. It shows which streets, which routes are comfortable to bike on – and which are not. And it also shows what pavement to expect: asphalt, cobblestone or cross-cut wood (yay!).

And additionally the over 100 year old bicycle map also shows where it was allowed, and where it was forbidden to bike. Yes, there were already no-go areas for bicyclists in Berlin at the end of the 19th century. The German king probably didn’t like the idea of having bikes and bicyclists all around him when walking down the Berlin-Mitte boulevard Unter den Linden – so back then it was actually forbidden to ride a bike there. And also on Leipziger Strasse, Potsdamer Platz and Königstraße and anywhere near the castle bikes were allowed.

The Landesarchiv also recently opened a web based research tool for historical Berlin maps. The interactive map tool lets you explore historical Berlin while using any of the provided ‘historical map layers’. A bit difficult to explain – but pretty easy to use: www.histomapberlin.de (en). The so called Strauble-Plan is probably the most spectacular map layer available on that interactive tool – since it is really old – and really complex, mapping most of Berlin’s inner city district Mitte. Pointer: the Strauble-Plan layer is actually a bit hidden behind the tab “More Layers”. There you will also find a layer for the Berlin Wall. Interesting:  you can actually combine a map from 1897 with the Berlin Wall border line. That literally puts a different view on Berlin’s history. 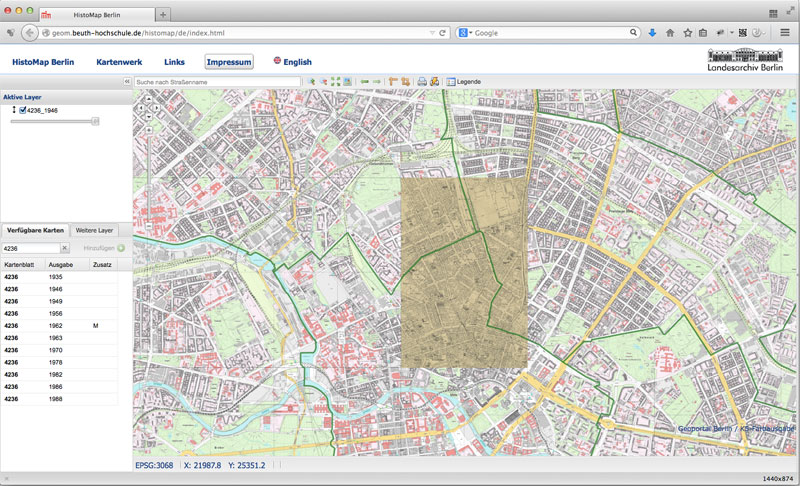 interactive navigator for historical maps of Berlin at www.histomapberlin.de

Details about the exhibition: