The Berlin Wall is probably one of Berlin’s most popular tourist attractions today – if not the most popular. However, since there is not much left of the actual construction, there is not much to actually see. And that can make it a bit difficult to understand and/or explain what the Berlin Wall actually was, how ‘great’ it was – and how great the impact of The Wall was on daily life back in the days of Cold War Berlin.

Over fifty years of its initial construction one may ask Why was the Berlin Wall built in the first place? Who built it? How long was it standing? And where was it located? Quite many questions are still arising today – people seem to be more and more puzzled about the idea of having a wall divide a city. And the fact, that after 28 years The Wall finally came down in 1989, doesn’t make it much easier to understand the complexity of the subject. But that it actually did come down is probably one of the most beautiful facts about the Berlin Wall and also the main reason, why so many people want to know more about it, want to see it, want visit it today. So let’s begin to dig a bit into Germany’s and Berlin’s history…

Why was the Berlin Wall built? 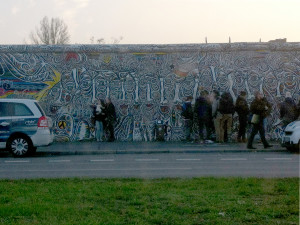 As I already mentioned The Wall was ‘just‘ a wall – but it was only one part of a quite complex and sometimes deadly border installation between West-Berlin and East-Berlin. Or in other words: the Wall was basically just the visible part of the border installations dividing the city that was facing the West Side of Berlin. This is also the reason why it is both well documented and large parts of it were covered with graffiti and paintings (Wall Art) and political statements. Behind the actual Wall however the border installations were way more complex: a so called ‘death stripe’, fences, watchtowers, border patrol – a combination of border installations that were built, rebuilt and improved over the years and decades that made it close to impossible to get even near the Wall from the East side.

Politically The Wall was the border line between East-Berlin and West-Berlin. Technically it was just a wall, the latest edition mostly made of concrete, that divided Berlin into two halves. Financially it was probably the most expensive construction that East Germany ever built (at least when you count in the costs for the fence dividing East and West Germany).  Emotionally is was much more than just that.

It might sound strange, but as far as I know the Berlin Wall was first built for economical reasons – or at least a combination of political and economical considerations. As you might already know, after the Second World War Germany and Berlin were split into four sectors: the French Sector, the British Sector, the American Sector and the Russian Sector. While the economy in the three western sectors was growing, East Germany and East Berlin in particular had to face a different reality and went a different route – and the economy suffered. Over the years many people left East Berlin – the East was about to lose its work force and its intellectual elite. To stop this exodus and to establish East Germany as an autonomous country, the East German government had to do something and ultimately decided to build a wall. 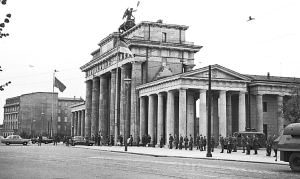 Looking at the history of the Berlin Wall there are often quite some very basic questions arising: When was the Berlin Wall built? For how long was it standing – and when and why did the Wall collapse? And when and how was it finally torn down? In the following paragraphs we’ll quickly have a look at the basic historical facts and figures.

First things first: the ‘first generation’ of the Berlin Wall was built in 1961. It was actually on August 13th 1961, Berliner woke up in a divided city. From one moment to the next friends and families were separated.

The first wall was a relatively ‘amateur’ wall, compared to the later designs. It was mostly a brick was, often a combination made up by sealed windows and doors of houses that were near the border line between the East and the West.

Over the years the Berlin Wall was replaced and ‘enhanced’ a couple of times – the Wall itself was built higher, the ‘death strip’ became wider, the border between East and West Berlin more and more impassable. 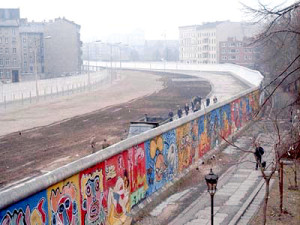 For over 28 years the Berlin Wall not only divided East and West Berlin, but also surrounded all of West Berlin, separating it from surrounding Brandenburg and neighboring Potsdam. That part of the border was only partly looking like the Wall as we know it. Over 60 km of ‘The Wall’ were a combination of metal fences and other border installations.

The most famous part of the Berlin Wall however is the inner city Wall with its almost iconic appearance. From the late 70ies / early 80ies on, the west side of the Wall was again and again painted on. Various bands played near the Wall, activists climbed upon it, attacked it with hammers. Artists from all over the world used it as a canvas, as a stage. And this colorful, partly chaotic patchwork of graffiti, political slogans and art of all kinds became part of the history of the Berlin Wall. 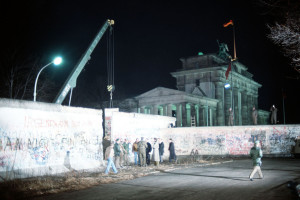 In 1989 the Berlin Wall was then finally torn down. The Fall of the Berlin Wall basically began on the evening of 9 November 1989 when first at Bornholmer Strasse a few people crossed the border. The East German administration had just made an announcement on TV, that citizens of East Germany could now travel to other countries without any special permission. People couldn’t believe what they just heard – went to the bridge at Bornholmer Strasse and confronted the border patrol with the news. After some back and forth the border patrol let people pass.

The best known and most popular locations is probably the East Side Gallery in Mitte / Friedrichshain. Here large parts of the original Wall stretch down Mühlenstrasse for over 1300 meters, covered with over 100 art pieces. But also the Berlin Wall Memorial in Bernauer Strasse (Mitte / Prenzlauer Berg) is an impressive spot to visit. A ‘curtain’ of metal bars symbolizes the former Wall. And you can visit two different information centers: one rather new is located at the corner to Gartenstrasse and the other one at the corner to Ackerstrasse also has an observation deck, from where you have a nice view over the historical site.

But also the remaining 80 meters of the original Berlin Wall near Topography of Terror on Niederkirchnerstrasse are very well worth visiting since that section of the Wall is mostly still in the very original condition it was in 1989: full of marks and holes – traces of the actual Fall of the Berlin Wall when people used tools to break parts off the Wall and cut holes into it. You will find this part of the Wall in Mitte, between the Museum Martin-Gropius-Bau and the Berlin Abgeordnetenhaus (Berlin’s state parliament) – halfway between Checkpoint Charlie and Potsdamer Platz.

And then there are also some five wall elements right at Potsdamer Platz. Here it is probably the most difficult to image, what the Berlin Wall once meant, since the surrounding area is so lively today. But still: these elements are at their original location. This used to be the ‘death strip’ between East and West Berlin. 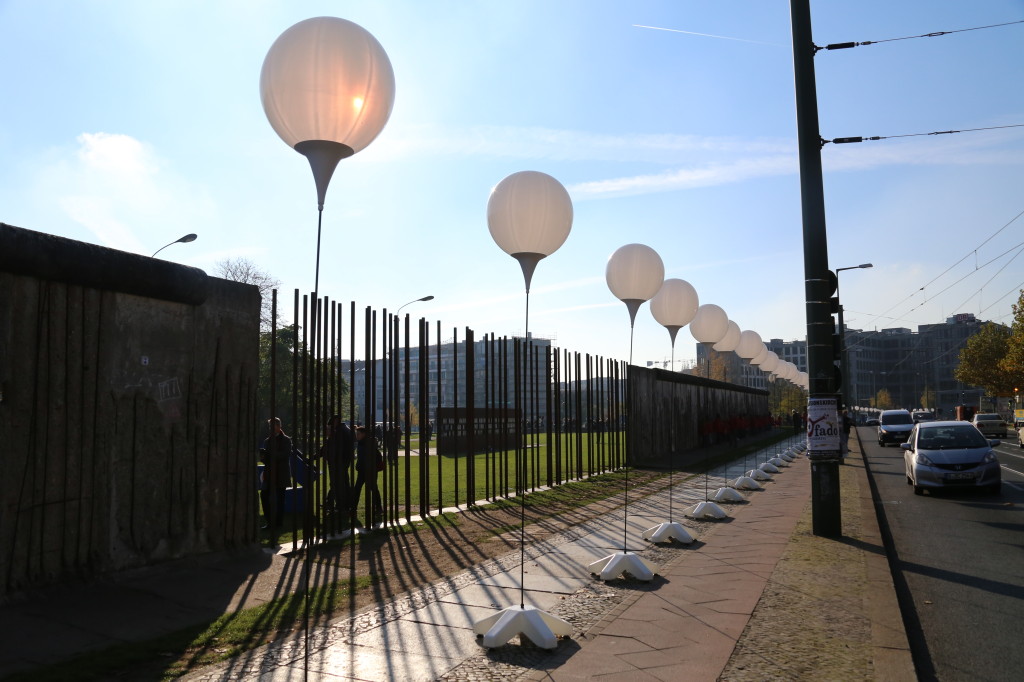 Also, if you happen to visit Bernauer Strasse, close to Nordbahnhof there is another ‘underrated’ original piece of the Wall: the yellow brick wall along Gartenstrasse also used to be part of the Berlin Wall. Today it just looks like a regular wall. See also Berlin Wall Memorial.

Where was The Berlin Wall located?

Politically The Wall separated two systems from each other: The West and The East. So politically one could probably say the wall was located right at the border line of these two systems. Technically that wasn’t always possible or practical since the border line between East and West was basically drawn on a map without paying much respect to the actual situation. For example the border line went right through lakes and across rivers, where no actual wall could be built. And sometimes the border line would have ‘bumps’ that were not followed by the Wall consistently because it would have been too much effort. 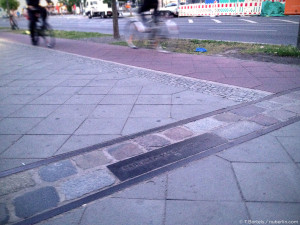 Today it can be difficult, if not impossible to know where the actual original wall once was. Of course many Berliners still know it pretty well – and there is also a ‘line’ marking the former border line between East- and West-Berlin. Mostly this line consists of a two-stone-wide line of cobbles / small boulders, eventually interrupted by metal plates with the inscription ‘Merliner Mauer 1961 – 1989″. In some areas you’ll find that line of cobbles easily – for example on the west side of the Brandenburg Gate or along Bernauer Strasse in Prenzlauer Berg / Mitte / Wedding.

The Berlin Wall on the map

If you don’t just want to know where the Berlin Wall was in a particular street, but in general – so if you want to get an impression of the dimensions, how it spread across the city and actually cut it in two – then it might help to have a look at a map. There is a great variety of Berlin Wall  maps to find today. I’ll try to compile a few that I found interesting. Hope you find them interesting too. 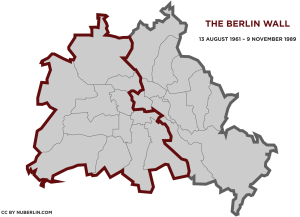 I recently made this rather simple map of the location of the Berlin Wall. It’s just showing the rough path where the Berlin Wall once was surrounding Wast Berlin, together with the border lines of all the different Berlin districts.

Please feel free to download the Berlin Wall map PDF or click the image to see a large version of the map. You may use the image as you like – both the pdf and the image are free of charge and free to use (Creative Commoms CC BY-SA 3.0).

Somebody actually drew a map of the Berlin Wall on Google Maps. So in case you really want to know where the Berlin Wall once was located between 1961 and 1989, you can have a closer look at this Google Map – zoom in, zoom out, scroll around – it’s rather accurate.

And here you’ll find the above Berlin Wall Map at Google Maps. (And if you happen to know, who actually submitted that map, then please let me know. Thanx!)

Another great resource concerning the Berlin Wall and its prior location is provided by ‘Stiftung Berliner Mauer’. On their website Memorial Landscape Berlin Wall (www.berlin-wall-map.com) you will find a map of Berlin, featuring a collection of ‘focus points’ along the Berlin Wall path, each with texts and historical photos pinned to its original location on an interactive map (Google Map).